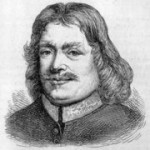 We’ve had tremendous amount of positive feedback about the “Pilgrim’s Progress” DVD. Therefore, we though it might be a good idea to post a little bit of background information about the story and its author…

“The Pilgrim’s Progress” was written by John Bunyan, a preacher who lived in England in the mid 1600s. John Bunyan’s family was very poor, and he experienced many hardships that left him searching for purpose in his life. He attended church and spent many years struggling to be worthy of God’s favor, but he never felt peace in his heart.

He finally left the Church of England and joined a small Bible study. There, he discovered the Bible’s good news that Jesus had already done all the work to save him. When he realized this, he found peace in his life and began preaching the Gospel of Jesus.

Preaching in the streets was illegal at the time, and he was arrested. He was told that he would be released if he promised to stop preaching. He refused and remained in prison away from his family for twelve years. During his time in prison, he wrote “The Pilgrim’s Progress”, an allegory about a young Christian’s journey through life.

John Bunyan’s story about the Gospel spread across the world and remains one of the most popular books in history.