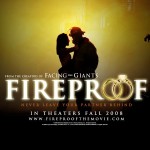 At work, inside burning buildings, Capt. Caleb Holt lives by the old firefighter’s adage: Never leave your partner behind. At home, in the cooling embers of his marriage, he lives by his own rules.

Growing up, Catherine Holt always dreamed of marrying a loving, brave firefighter…just like her daddy. Now, after seven years of marriage, Catherine wonders when she stopped being “good enough” for her husband.

Regular arguments over jobs, finances, housework, and outside interests have readied them both to move on to something with more sparks.

As the couple prepares to enter divorce proceedings, Caleb’s father challenges his son to commit to a 40-day experiment: “The Love Dare.” Wondering if it’s even worth the effort, Caleb agrees-for his father`s sake more than for his marriage. When Caleb discovers the book’s daily challenges are tied into his parents` newfound faith, his already limited interest is further dampened.

While trying to stay true to his promise, Caleb becomes frustrated time and again. He finally asks his father, “How am I supposed to show love to somebody who constantly rejects me?”

When his father explains that this is the love Christ shows to us, Caleb makes a life-changing commitment to love God. And with God’s help he begins to understand what it means to truly love his wife.

But is it too late to fireproof his marriage? His job is to rescue others. Now Caleb Holt is ready to face his toughest job ever…rescuing his wife`s heart.

On Friday, FIREPROOF will be playing in 905 theaters across the nation, including 100 new venues. Because of your support …

Each week since it opened in late September, it has played in more theaters than the previous week!

For three weeks running, it has been one of the Top 10 movies in the country!
In three weeks at theaters, more than 2.2 million people have seen it!

The Love Dare, originally a plot device, has become the No. 1 bestseller on the New York Times list of paperback advice books!

It’s a movie that is making an impact, according to Josh: “I’ve been married for eight years and we have overcome the most extreme problems. FIREPROOF reaffirmed the decision we made to fight for our marriage. … Marriages are not transformed by movies, but through this movie, Jesus Christ will save many who are open to Him and His Love.”

As Larry reports, the impact is eternal:

“I am a police officer and a bi-vocational pastor. Last week, a detective asked if he could see me in his office. I noticed that there were tears in his eyes. He looked at me and said, ‘Larry, I want to become a godly man. I have done things that I am not proud of and I want to change.’ I shared with him the gospel of the Lord Jesus Christ. When I asked what got him to thinking about making a change in his life, he said, ‘My wife and I went to see a movie called FIREPROOF. I saw a lot of myself in that movie and it did not make me proud.'”

Lives, and eternities, are being changed!