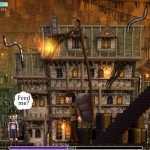 Riveting Game With A Message

For those still wondering whether to purchase a copy of the Pilgrim’s Progress Game here’s an interesting review of the game.

It’s important to note that if you are biased against the Bible and its teachings that this won’t be the game for you. John Bunyan’s two-book “The Pilgrim’s Progress” is an amazing allegory of the life that one must lead from salvation on their “race” to the “finish line” from a spiritual perspective. This is considered still yet one of the most read novels and is one of the greatest works ever written. John Bunyan wrote these two books while serving prison terms for preaching the Word of God and his life story is a near mirror of the allegory itself giving it a greater impact. The message is wonderful and powerful as no matter what hardships the main character “Christian” faces, in the end, victory is not in the hands of man but in the hands of God. We simply do our best to follow after Him, but He has already won all our battles. We simply need to have faith in His Word and claim the victory. That being said, as a game based off a book which is rich with Christian teachings and symbolism, this game carries that through as well.

The game’s graphics are quite good for a game of its calibur. It is a side scrolling game and therefore won’t be the graphics of your normal RPG’s like WoW, Guild Wars, etcetera (which Christians shouldn’t be playing anyhow). Most side scrollers really are truly lame in their graphics and expecting this game to be the same, I was hesitant in buying it. However, the graphics and scenery were extremely enjoyable and at times I just stared at the screen to take in the complete beauty of it all.

The game has a skill system (even if there are only a few skills to research into). It will be important to determine exactly how you want to play. Do you want an offensive Brute or a defensive Knight? Go full defense and it may take longer to kill an enemy, but it will also take longer for him to kill you. Go full offense and if your attack speed is fast enough you’ll get the first hit. If your attack is high enough, that first hit will kill your opponent (this will require a heavy dependence in focus on starting abilities and the use of your Blessings if you are to succeed against bosses). You can’t reset any points you research into your skills. Focus is a completely different set of stats that you can reset your invested points in to rearrange and is extremely important to the success of your toon. There is no customization of your toon. The game takes on its view of an accurate portrayal of the “cartoon” version of Pilgrim’s Progress’ main character so you won’t be able to change hair color, height, clothing, or even play as a female. However, the point of the game is to play from the view of the main character, so I didn’t consider that a negative thing.

The game plays into 3 difficulties. Normal, Difficulty, and Expert. You can only choose expert by beating the game in Difficult. Normal is extremely easy game play. Go full attack and zeal with occassional research in your defense and you’ll be able to 1-hit anything except bosses. Bosses will require a bit of juggling with blessings, but it’s nothing you can’t handle. Since you can travel from beginning to end as much as you want throughout the game, it is very easy to level up in any area you can handle without much effort and then continue on to the next spot with stronger enemies already set up to 1-hit them as well. You can just proceed straight through as well without taking the time to level up for that advantage if you want. This will be a bit more challenging and require a bit more skill. Expert mode with all the secret hidden crosses (which gives great bonuses), and maxed out starting abilities starts off about as easy as difficult mode. However, attempting to use the (level up here until I can 1-hit in the next location) more time consuming and a bit more skill-requiring. As you progress, you’ll soon find that to stay in an area until you can 1-hit in the area you are in will almost be unfeasible as the xp gain is far more worthwhile on creatures in later areas. It is better to go against creatures that will occassionally kill you if you aren’t careful than stick to creatures which you can 1-hit kill with ease (and you won’t be able to 1-hit much in this mode either). While I felt that Difficult mode was too easy, Expert mode plays out exactly the way I would have hoped Difficult would, and that is a wonderful thing.

I literally play this for hours each day. As someone who doesn’t like side-scrollers, I am rather addicted to this one and HIGHLY recommend it to anyone interested in this game. However, it does operate based off the books. So, if you are one of those people who hate Christians like Hitler hates the Jews, this game just isn’t for you. But if you live by the Christian tenant that all men are created equal and are open minded enough to enjoy a game that might teach something you don’t completely agree with (or don’t mind playing a game that is teaching something you already know and agree with) then this is definitely the game for you.

3 Responses to “Riveting Game With A Message”