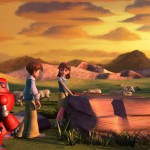 The Superbook Christian Animations are a major and epic undertaking by CBN to show the relevance of the Bible to a 21st century generation. It’s a massive encouragement to us at Hope Animation and a role model for what we aim to work towards with the quality of our Christian Animations in the next few years. 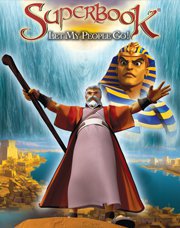 Joy, Chris and Gizmo are on another adventure. At a time where kids need God’s supernatural power, strength, freedom and direction more than ever, CBN presents its latest Superbook adventure, Exodus. From mighty miracles to insecurity issues to widespread destruction, extreme frustration and victorious escape, Superbook’s Exodus brings the Word of God alive with the latest computer animation providing biblical truth for today’s generation.

Superbook producer John Schaeffer: “I think what our biggest thing is: How do we reach a generation to give this message that there is someone who loves you – he created you, he has a purpose. But how do you do that in a way, that if they don’t go after the Bible and read it and go to a Christian bookstore – what do you do? We have to find a vehicle and a medium and that’s what animation is strong.”

In each episode of Superbook best friends Chris and Joy are faced with an everyday problem that Superbook helps them to solve by actually placing them in the stories of the Bible and letting them meet and interact with biblical characters.

In Superbook’s pilot “David and Goliath” children learn that they can conquer giants when they trust in God’s power. Creation broke tradition by taking the familar story of temptation and sin in the garden of Eden all the way back to the fall of the angel Lucifer. And by July 2011 CBN plans to complete 10 more episodes, 13 in total encompassing Scripture and lessons from Genesis to Revelation. 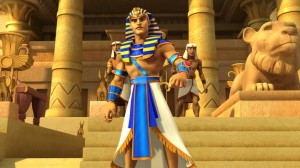 “When you think about the Bible stories, when people watch it whether they are believers or not, there’s some kind of spiritual truth that resonates in them and I think that’s why the original Superbook series, you always hear so many people saying it touched them.”

CBN created Superbook as part of a campaign to reach Japan nearly 30 years ago. It was a monumental success drawing a weekly audience of nearly 4 million people. During the fall of communism in the 1990s Superbook aired across the former Soviet Union where millions of lives where changed through the Superbook series and more than 100 countries watched the original Superbook series. It was translated into more than 43 languages, viewed by an estimated half billion people.

The updated series will reach billions more. With the best writers and producers and CG animation the new Superbook Christian Animation rivals major studios like Disney and Pixar. 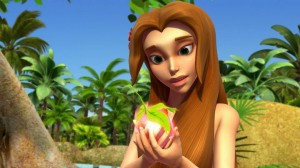 “Probably the show that’s as epic as our is Starwars Clonewars. Usually characters you see on typical animations, there’s maybe 3 or 4 characters on screen, only a couple of set pieces. Our show has typically 22 characters and episode, 15 of them are talking characters. The set pieces we use are very epic – Pharao’s palace. Our shows are almost like mini movies.”

Every detail and historical account is back checked for accuracy and cultural credibility. In Exodus, Superbook producers were challenged with what really happened to Pharao.

And people are invited to do more than watch the Superbook Christian Animation.

“The 22 minute show is a catalyst and a vehicle to get kids draw into the Bible. But we want them to have tools to learn and experience the Bible more. And so we have to bring them into the interactive site whether it’s on the web or an App. We have to make sure it’s in an area that they’re comfortable with.”

Here are the Season One Working Titles:

4 Responses to “Making of Superbook”