Sleuths and Savior Making of Superbook
Press the button 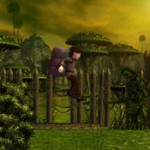 A huge world to explore, an innovative battle system and a deep and uplifting story based on the greatest Christian novel of all time!

The Pilgrim’s Progress: The Video Game is based on the novel by John Bunyan. The Pilgrim’s Progress was first published in February 1678. It is considered one of the greatest works in English literature and has been translated into more than 200 languages and has never been out of print. John Bunyan began writing this novel during his twelve year imprisonment for holding religious services outside of the established church at the time.

“The Pilgrim’s Progress” is an allegory of a Christian life, starting from the time a person learns of Jesus to the time when they die and reach The Celestial City (Heaven). In the game you take control of Christian as he journeys from his doomed hometown, The City of Destruction, and toward the Celestial City. The novel is in the public domain and is available free on the internet! It is well worth the time to read as no movie or game will likely ever do it justice.

To order your copy of “The Pilgrim’s Progress Video Game” click here. Please also send us some feedback about this game via a comments box on this page or the contact us section of the site. We aim to answer all your emails and generally love hearing from our site visitors!