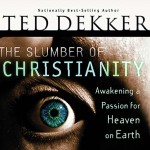 The slumber of Christianity

A short review about a good book that examines the reasons for our lack of hope and how to become really passionate about heaven.

In light of HOPE 2008 there’s an excellent book that I would like to recommend to you as I believe that it is critical to understand and apply its principles before we as churches are able to share HOPE with our nation. Whilst its title “The slumber of Christianity” or as initially proposed “The hopelessness of Christianity” sounds rather depressing, I must say that there have been very few books that have encouraged and uplifted me in such a profound way as the truth that’s depicted in its pages.

Author Ted Dekker explains the incomparable great power that we as believers have if we are firmly grounded in HOPE. By understanding the dynamics of HOPE and HOPELESSNESS we will be able to distinguish where our feelings of happiness and deep discouragement come from and learn that HOPE (of all things) is the single most influential element in achieving happiness: “Without HOPE our faith is dashed and our love is empty.”

Starting with his own life story of worldly success, Ted describes his journey of seeking happiness and earthly fulfillment. The narrative, reminding a great deal of King Solomon and the book of Ecclesiastes, tells about Ted’s upbringing as a missionary child, his entrepreneurinal spirit, early success within a Marketing firm, his highly lucrative set up of a multimillion dollar enterprise, the acquisition of further companies, his ever growing hunger to consume luxuries and wealth and eventually his total collapse after disappointment and frustration when all his riches failed to deliver the happiness that he had hoped for.

Only after months of depression, the loss of his business and the death of a loved one, Ted discovers a true and living faith that he recognises to be founded in a deep and longing hope for heaven. Whilst the book is a surprisingly honest resume of Ted’s life, he also describes a slumber that he encounters within the lives of most of us Christians in the western world. It seems like we have fallen asleep to the HOPE of heaven that is mentioned on nearly every page of the New Testament and eternity has become more of a crutch in Christianity than a prize.

We are far more occupied with this life than the next, which is mirrored in our surprisingly worldly attitude towards death, our profane aspirations for success in this life and our faded vision for the future. Christians are not much happier than the rest of the world (which is reflected in divorces, depression and burn-outs) and misguided theology often burdens us with an expectation for more earthly fulfillment and satisfaction than we manage to realize.

Now there is also real Christianity that we were saved for. A kingdom so rich in reward that our HOPE for that kingdom causes us to groan! HOPE is imagination put in the harness of faith, being driven by a compelling motivation, a persistent preoccupation with an idea that is beyond our ability to reason: an obsession with God, a desire for the heavenly bliss that awaits us and a passion that will make us to go to unthinkable lenghts to find ways to communicate the Gospel.

So, the question to us as the church is this: If we ourselves do not have much HOPE in our own hearts and lifes is it possible to share HOPE and demonstrate it through word and deed? Maybe HOPE 2008 will be less about telling the world about our HOPE in Christ and far more about the church rediscovering its lost sense of HOPE?

Well, let me encourage you to read the book, let’s rededicate our lives back to God, fully sell out our churches to God’s eternal HOPE and then get stuck into preaching the word of HOPE through our lives, words, actions and deeds!

1 Response » to “The slumber of Christianity”